Mechanical activation by M. Melikyan and its influence of on the strength properties of composite materials (pt.2)

Two groups of samples were made in different ways: Group 1 (control samples made according to the manufacturer's instructions) and Group 2 (author's technology). To assess the strength properties of specimens made of a composite material, a three-point static bending test method was used. This method is widely used in modern testing practice and meets the necessary requirements. The feasibility and validity of the choice of this test (bending test) is consistent with the traditional assessment of the strength of dental materials.

As you know, during the act of chewing, both vertical and horizontal forces act on the teeth; moreover, the lateral group of teeth mainly works in compression, and the anterior group of teeth in bending. Hence, the following requirements were imposed on the prepared samples: 1. After manufacturing, composite samples should have a smooth and even surface without swelling, chips, cracks and delamination. 2. Differences in weight and geometric parameters should not exceed 5%. Samples that did not meet the above requirements were rejected. Our samples for testing for three-point static bending met all the requirements. After fabrication, the samples were immersed in water. 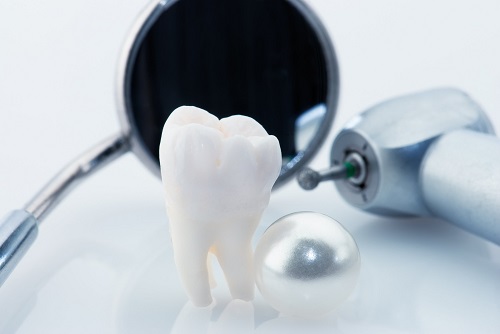 Before testing, each sample was placed in the testing machine between the movable rod and the end of the sample holder. On the end part of the holder, there were protrusions in the form of triangular prisms made of hardened steel, located at a distance of 35 mm from each other. A triangular prism with a corner radius of 0.8 mm was also located at the end of the rod. When loaded, the movable crosshead moves downward, creating a force between the specimen holder and the stem. The load was applied at the midpoint between the supports. The rod is connected through a hydraulic system to a manometric transducer, which registers the generated force with an accuracy of ± 0.01 N. For each sample, the load required for its destruction was recorded. The speed of the stage movement during the tests was 1 ± 0.5 mm / min. The maximum force generated by the machine is 500 N.

Join us in social networks